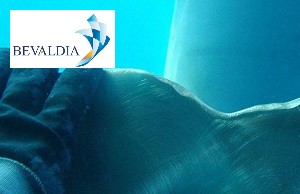 Propeller cavitation is a common occurrence in ships’ propellers during their lifetime. Propeller cavitation occurs when the propeller moves into the water at a high speed and generates a pressure through its propulsion. This pressure holds the water on the side of the blades and on the tips. When the pressure drops and depending on the water temperature, the water will start to boil. During this phenomenon, the water evaporates and the bubbles created start to move to the area of the blade with the greatest pressure, where they are not favored and therefore are destroyed. Bubble destruction releases energy that affects the blades, creating a “burning” that causes “pitting” of the propeller surfaces.

Finally, poor implementation of various technical maintenance technics which can contribute to a faster occurrence of propeller cavitation. Considering the above, there are many methods to protect the propeller from cavitation. Some of these methods are: 1) Grinding (smoothing out) the blades when the phenomenon is observed. 2) Propeller anti-fouling coatings with specifically slippery paint that prevents marine organisms from sticking to the vessel and are designed to make the propellers inhospitable to most penetrating marine organisms. 3) The right choice of a quality propeller. 4) Proper selection of workshop for maintenance.

Yet another factor in the appearance of propeller cavitation is various marine organisms, which settle on the propeller’s surface, and create erosion and greatly reduce its performance. The phenomenon begins at a microscopic level, gathering a slimy layer of marine bacteria on the propeller. On this layer of marine bacteria, seaweed and larvae of organisms are attached and begin to grow in a little while. Another reason that helps the development in the appearance of cavitation is the propeller s construction material, as the material changes its mechanical properties accordingly.

Looking for a reliable partner for Underwater Rudder Repair?

Looking for a reliable partner for Underwater Rudder Repair?