Posted by psomakara In Articles

BY : Brendan Fitzsimons  and Trevor Parry co-authors of a chapter entitled “Paint and Coating Failures and Defects” in the new edition of “Corrosion by L Shreir” ON DECEMBER, 2009

Fouling is a natural phenomenon which occurs continuously in the marine environment. On sea-going vessels this leads to a significant increase in fuel consumption. The term ‘fouling’ describes the growth of marine plants and animals on structures in the sea. The fouling organisms of concern are those we encounter on ship’s hulls. It is estimated that the number of fouling species involved in fouling is in the region of 4500-5500 although only a small number of these species are of great concern to ship Owners and Operators. Classification of fouling can be demonstrated by the two main groups; Macrofouling and Microfouling with further sub classification between animals, plants and slimes. 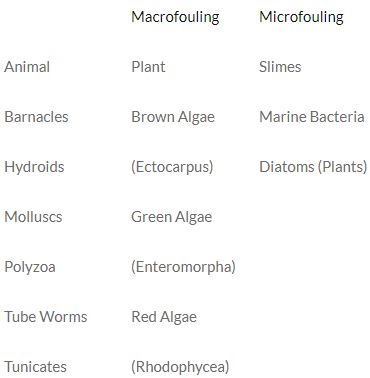 As can be seen above, plant fouling is an assemblage of different types of seaweed, mainly green and brown varieties, while animal fouling comprises principally barnacles (acorn and gooseneck), tube worms, polyzoa (hydroids and bryozoa), and mussels. The slime consists of microscopic forms of both plants and (diatoms) and bacteria.

Contrary to some belief, the adult forms of fouling such as mussels and barnacles are not floating around in the water ready to be attached to structures, it is the larvae or sea spores which float around in the top 100 feet or so of the waters. The moment a larvae settles on a structure the metamorphosis begins. The length of time a larvae remains freely swimming is variable and may range from about six weeks, in the case of barnacle larvae, to a matter of hours in the case of larvae of some tube worms and hydroids. Such an existence is hazardous and to ensure survival the animals produce large numbers of larvae. A native barnacle, for example, will produce 10,000 in a season. Reproductive potential is only one of several attributes that characterise the marine fouling forms found on ships. As a consequence of the intertidal character of their natural environment they have the ability to withstand extremes of temperature and salinity, also the ability to attach quickly and firmly to surfaces; the capacity for rapid growth highlights the severe problem of marine fouling to ships. Although it has been shown that seaweed spores and certain gooseneck barnacles are capable of attaching in water flows up to 10 knots and other barnacle larvae at water flow of up to 5 knots, it is still assumed that the bulk of settlement to ship’s hulls occur while the vessel is stationary. Algae spores attach themselves within minutes of contact with a surface, whereas animal larvae require considerably longer periods for firm attachment. On ship’s hulls the settlement of plant fouling occurs where there is available sunlight, i.e. around the waterline and a few meters below. Light is necessary for them to survive, light energy being converted to chemical energy (food) by photosynthesis. Animal organisms, however, do not require light and can therefore be found on any underwater area.

Prior to the mid sixties, commercial vessels tended to be comparatively small and lack of port facilities determined that lengthy stationary periods were encountered in most types of vessel operation. This predisposed shipping to fouling by marine animals, especially barnacle fouling, and up to the mid-sixties biologists working on fouling problems worked on barnacle fouling. The introduction of large ships and improved port facilities resulted in considerably decreased stationary time during vessel operation and the fouling emphasis in shipping changed from an animal dominated problem to an algae dominated problem. However, if a ship does encounter a lengthy stationary period it becomes vulnerable to animal fouling. Animal fouling problems are caused by the larvae stages, the larvae being comparatively large (1mm), and as with all animal fouling problems a period of time of around 2 – 3 days is required for the establishment of the problem to allow the larval stage of metamorphosis to become the miniature adult. Where light is the food for plants the microscopic ‘drifting life’, consisting of micro organisms (planktonic), is the food for many types of animal fouling.

The most commonly encountered fouling animals and in consequence much is known about their biology. These animals live within hard calcareous shells and again have a net of tentacles to trap planktonic food. Barnacle larvae are selective in choosing their settlement sites and can actually recognise the presence of other barnacles. This results in barnacles attaching close to other members of their own species which ensures close enough proximity to allow cross fertilisation. Removal of accumulations of barnacle fouling by underwater scrubbing results in a roughening of the surface and also in a spreading around of a biologically attractive ‘flavour’. Rapid recolonisation by yet more barnacles is the inevitable result! When the animals die, the shell remains on the ship’s hull.

Specifically adapted for planktonic life attached to floating objects, gooseneck barnacles are the exception to the rule that the shoreline plant and animal communities are the source of all macroscopic fouling problems. They differ from acorn barnacles in having long feathery stalks. When adult they are around 10cm in length. The ‘lepas’ barnacle is commonly found attached to floating objects, but a more severe problem is caused by ‘conchoderma’ a gooseneck typically found attached to whales.

Although plant-like in appearance, hydroid are typical animal fouling forms. The so called ‘flower heads’ are actually batteries of stinging cells which are used to paralyse and capture planktonic food. Hydroids are colonial forms. Each animal is placed in a little cup, the body has a single opening which serves both as mouth and anus. They are often found on the flats of vessels and are often misrepresented as algae forms. In general there is insufficient light to allow algae fouling to grow on the flats of large vessels; filamentitious growths found on these areas are generally types of hydroid.

Molluscs are paired shells and are similar to mussels and oysters. Although molluscs have a hard shell the attachment threads are relatively weak which limits its ability to attach to moving structures; growth is normally found on stationary objects.

As the name suggests, these animals are composed of many cells. They have a hard calcareous skeleton. Some forms are flat and encrusting while others have an erect growth habit. In each case close observation reveals their lace-like appearance. They use a net of tentacles with which to catch their planktonic food.

Easily recognised by their hard white calcareous tubes, these tube-dwelling animals are again plankton feeders and entrap their food using a net of adapted tentacles. Again, the larvae can exercise a degree of selection over their attachment site and are capable of recognising the presence of their own species often resulting in the build up of large complex colonies.

Tunicates are sessile marine animals, some of which are important fouling organisms. Tunicates live in a wide range of habitats, from the lower part of the seas down to waters of great depth. Some species are attached to solid surfaces, such as ships, while others are attached to loose substrata of sand and mud. Most species feed mainly on minute plant cells of the plankton, which they filter from a stream of water down through the oral opening into the perforated pharynx and expel through the atrial opening. This current brings required oxygen and carries away waste products.

specially adapted for planktonic life. The fouling goosenecks are all oceanic and prefer to settle on a substrate which is in motion i.e. ship’s hulls. Some gooseneck barnacles even settle when the ship runs at a speed of 10 knots.

Tubularia – a typical Hydroid. Although plant-like in appearance, hydroids are typical animal fouling. Hydroids are, in fact, one of the most important animal fouling. They can be distinguished from algae and some bryozoa, which they superficially resemble, by the polyp which appears as enlargements to the ends of the branches.

Polyzoa – colonial animals with a great variety of forms, which may at first result in confusion with organisms such as hydroids, compound tunicates and even tufted seaweed. Divided into 2 groups; encrusting and erect.

Also called Serpulids. Settlement is heavier in warmer waters. Feeding is conducted on the planktonic microscopic organisms carried past them in the water currents.

Sea squirt fouling on the bottom of the ship.

Regularly encountered are the finely branched brown algae ‘Ectocarpus’ and the green algae ‘ Enteromorpha’, commonly known as ‘grass’ fouling because of the similarity in appearance. There the resemblance ends. Algae are very simple plants, deriving their nutrient requirements by uptakes directly into their body cells from the surrounding seawater, the root structures being non absorptive with use for anchorage only. When divers have to remove algae growth by scrubbing, they leave the root structures embedded on the surface. Because of the simplicity of the plant, rapid growth occurs and further cleaning becomes necessary. Indeed the more a surface is scrubbed the rougher and more attractive it becomes to further algae colonisation. Algae fouling is caused by spores which are too small to be seen by the unaided eye and on a roughened surface those spores are capable of attaching within seconds and becoming established in a few hours.

Fouling by the brown algae ’Ectocarpus’ is similar to that already described for ‘Enteromorpha’. The green algae tend to dominate in positions of higher light intensity while ‘Ectocarpus’ dominate in conditions of lower light intensity. Since all algae require light for growth they are not generally found on the flat bottoms of commercial ships. With few exceptions all green algae are green grass colour owing to the predominance of chlorophyll. Red algae is basically filamentitious, but compaction of cells may conceal this feature. The life cycle is peculiar and complicated, and the reproductive products are dispersed passively by the water currents.

underwater exposure. The colour is attributed to the pigment fucoxanthin. The spores of the Ectocarpus are very small and can be planktonic for one day before they settle. Ectocarpus dominates in conditions of lower light intensity.

Most common forms of green and brown grass.

Copyright © 2020 BEVALDIA. All right reserved.
Reproduction of any part of the site, which is covered by (copyright) cannot be used in any form without the written permission of BEVALDIA.