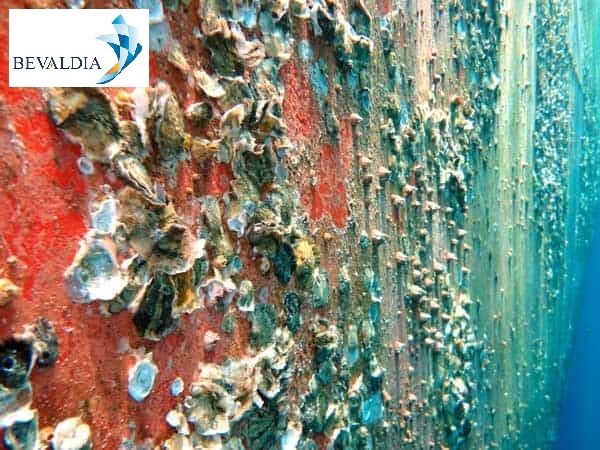 Posted by psomakara In Studies

[…] Fouling is the undesirable growth of organisms on artificial structures immersed in seawater, of which the most visible form is macrofouling such as barnacles and seaweed. Fouling control is necessary in order to prevent drag increase and consequently increased power requirements and fuel consumption in order to keep the same service speed. Fouling may also hasten corrosion (Edyvean, 1982) and reduce propeller efficiency (Kan et al., 1958; Mosaad, 1986). Worldwide, the cost of keeping marine fouling at bay is estimated to at least 1,4 billion dollars a year (Clare, 1995). For conventional ships, 50-80% of the resistance is caused by friction between the water and the wetted surface of the ship. The smooth, wetted surface of a newly built ship has a roughness of about 80-130 μm. However, the roughness of a surface fouled with for example green algae can easily exceed 1000 μm, causing enormous added resistance. Williams (1923) mentions an increase of 300% for the resistance of a heavily fouled plate as compared to when it was towed in a clean condition. Schultz and Swain (1998,1999,2000) carried out LDV water tunnel experiments with flat plates fouled by algae and found an increase in frictional resistance of 125%. […]

The process of fouling is generally divided into four stages, as illustrated in Figure 2.1 (From Davis and Williamson, 1995). 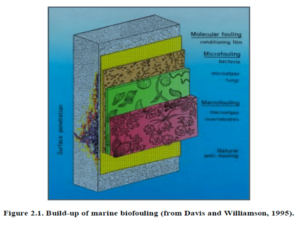 Fouling starts from the moment the ship is immersed in the seawater. The hull rapidly accumulates dissolved organic matter and molecules such as polysaccharides, proteins and protein fragments (Egan, 1987). This conditioning process is regarded as the first stage of fouling. It begins within seconds, stabilizes within hours, and scene for later fouling stages. The genesis of fouling almost invariably occurs when the ship is at rest, most commonly in port. Ports differ considerably in their tendency to cause fouling (British Maritime Technology – BMT, 1986) and the problem of fouling is more severe in tropical water (Stevens, 1937). The nature of the fouling depends on the species of animal and plant life present in the water, the salinity and temperature of the water, the degree of illumination of the hull surface, the season when berthing takes place and the time spent in port.

When the conditioning film has been formed, bacteria and unicellular organisms such as diatoms then sense the surface and settle on it, forming a microbial film (Fletcher and Chamberlian, 1975). This second stage of fouling involves the secretion of mucopolysaccharides, and generally eases the way for macrofouling settlement (Fischer et al., 1984). This slime already has a significant impact on the ship’s performance, as first discussed by McEntee (1915). The influence of slime films on ships resistance was reviewed in the Author’s MSc Dissertation (Candries), 1998, which is summarized here.

A separate section was devoted to the effect of slime fouling in the standard work on antifouling for the first half of the 20thcentury, Marine Fouling and its Prevention (Woods Hole Oceanographic Institute- WHOI, 1952). Experiments coated with different paints, showed that after 10 days’ exposure an increased resistance of more than 10% was measured, which is attribute to the effects of the slime film.

Watanabe et al. (1969, in recognition of the fact that paints appeared to make an impression on slime, examined the effects on frictional resistance arising directly from the presence of slime, and it was concluded that the significant increase will occur as a result of the formation of slime.

Loeb et al. (1984) measured the effect of several different of microbial slimes on the drag of rotating discs of different materials and roughnesses. Results showed that the discs’ frictions drag increased with 10 to 20%. Based on similarity law characterisation methods, a drag increase of 5 to 8% was thus predicted at 40 knots for smooth planes.

Lewthwaite et al. (1985) developed a technique for determining the local skin friction of a ship’s hull under seagoing conditions. Using a small pitot type probe, detailed measurements of the boundary – layer velocity profile and hence the local skin frictions were obtained. As the hull became covered with a dense slime film but remained virtually free of weed and shell growth, an increase in skin friction of about 80% was recorded together with a 15% speed loss.

Some interesting experiments were carried out by coating a flat plane with an agar-gel of different concentrations (El- Labbab, 1986). Agar is a substance derived from micro-algae, and the agar-gel would be representative of different kinds of slime films. A plane coated by a 3mmmm thick agar-gel with a concentration of 0.5% would correspond to fouling by a light to moderate slime film, and a concentration of 1% to heavy slime. Towing tests showed that the frictional resistance coefficient was increased 4-11% and 13-21% respectively.

The US Navy carried out power trials after underwater cleaning of a frigate. A significant change in power consumption was measured after the removal of a 22-mounth old mature slime layer, ranging from 8-18% and the maximum speed of the test ship, was increases after cleaning by about 1 knot (Bohlander, 1991).

Schultz and Swain (1998, 1999, 2000) investigated the effect of biofilms on the turbulent boundary layer by comparing the boundary layer velocity characteristics of different surfaces with a two-component Laser Doppler Velocimeter. They found that the skin friction coefficient was dependent on not only the biofilm thickness but also on its morphology. An average increase in the skin friction coefficient for slime films with mean thickness of 163μm and 347μm before testing was 33% and 68% respectively. The average increase for a surface dominated by filamentous green algae (Enteromorpha spp.) with a mean thickness of 310μm was 187% (Schultz and Swain, 1998).

The presence of adhesive exudates and the roughness of irregular microbial colonies enables the setting of more particles and organisms. These are likely to include algal spores, marine fungi and protozoa. The transition from a microbial film to a more complex community that typically includes multicellular primary producers, grazes and decomposers is regarded as the third stage of fouling (Davis and Williamson), 1995; Bertram, 2000).

The final stage involves the settlement and growth of macro-algal and animal fouling. Green algae, mainly Enteromorpha, can grow up to 150mm long in a band a few meters wide at the waterline. It grows rapidly and scrubbing it off can trigger an even more vigorous growth within a few weeks. Brown algae, mainly Ectocarpus, grow further down the side of the hull. Both these algal species have an extraordinary reproductive potential and an ability to withstand widespread fluctuation in environmental conditions such as desiccation and salinity (Callow et al., 1986). Animal fouling, such as shell fouling, may consist of barnacles, mussels, polyzoans and tubeworms. As mentioned, weed and shell fouling decrease the ship’s performance drastically and should definitely be avoided.[…]

Source: University of Newcastle – Upon – Tyne Department of marine technology